This book chapter looks at five key variables that cause an innovation to be adopted by the mainstream – relative advantage, compatibility, complexity, trialability and observability.  Each of these variables is applied to a variety of settings outside of education including popular music and farming to explain how an innovation can be both more and less desirable to both an individual as well as a social system. The article stresses that preventative innovations such as wearing seatbelts are often harder for a social system to adopt due to delayed reward. An important consideration is viewing the variables as interdependent. A computer that is faster and more powerful (relative advantage) may not be adopted by others if it is difficult to use (complexity), has a mistranslation in the name of the product in the local language (compatibility) or the benefits are not visible to members of the social system (observability). The variable of trialability is particularly interesting as it positions early adopters as being more in need of trialability due to the lack of precedence. However, late adopters often need less of a period of experimentation before full-scale use as their peers have acted as a trial by proxy.

Although this book is nearly 15 years old, the ideas are still relevant to those wishing to introduce a new idea to a community. A weakness of this chapter is that the case studies are not grounded in schools which have their own unique regulations, relationships and pedagogical concerns. While the leadership of a school can mandate the use of a technology, it must recognize that these mandates only act as a mechanism for the system to put pressure on individuals to recognize the relative advantage of an innovation. This chapter positions both individuals and communities as not being blank slates for to introduce innovations but rather than social systems with complex beliefs, experiences, and values that change agents must be mindful to respect if they wish to successfully introduce a new idea.

This paper was based on a 3-year evaluation of grants made by the WEB project, a Technology Innovation Challenge Grant in Vermont. This enabled the researchers to make a cross-case analysis to identify general trends in the adoption of technology by teachers. The researchers initially conceptualized ICT adoption as a cyclic process of four stages. First teachers begin as learners before moving on to adopters of educational technology before exploring with their students in the classroom and as at the final stage they make a reaffirmation/rejection decision on using ICT in the classroom.

During the project, researchers added a fifth stage ‘Reaffirmers’ where teachers take on the role of capacity builders, troubleshooters, and trainers. The teacher/leaders influence often moved beyond the boundaries of their schools through participation in online communities. Thus the skills the teacher/ICT leaders developed in this fifth stage were portable beyond the teacher’s context. The researchers noted that while the principal did not need to be leading change. However, factors such as support in resources, time and making connections between ICT, curriculum, and student assessment suggest that the principal has an important role in creating an environment where successful ICT integration can take place.

This article is nearly 20 years old. Technology has evolved considerably during this time. However, the insights gained during this period of early ICT adoption are still relevant. While many schools now have technology specialists that lead the adoption of new technology, school leaders have an important role to play in helping to make connections between technology, the school’s curriculum, and overall student achievement. A limitation of this study is looking for a second fifth stage which follows that path of rejection of an ICT initiative. Do those teachers return to stage 1 of ICT adoption or are there special considerations that might influence these teachers in later  ICT initiatives? 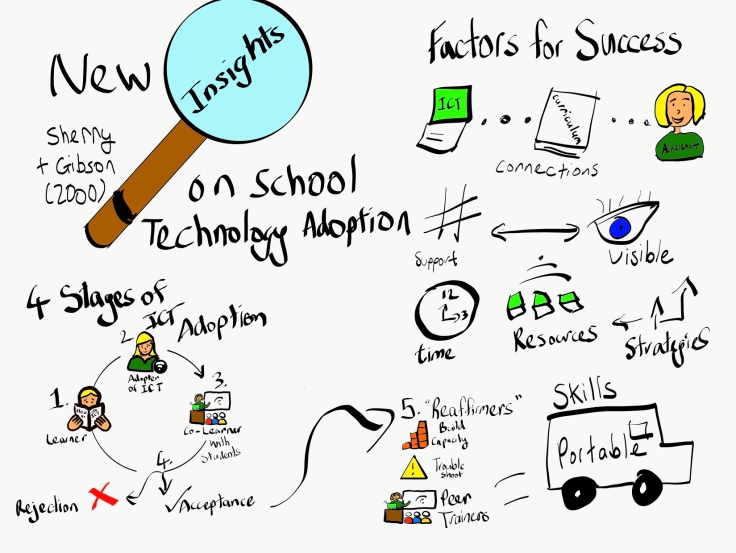