I often get asked if I know a good handwriting or science app or which apps I use the most.

I chose the camera because it’s a piece of technology that is most accessible and used by teachers outside of the educational sphere. At the baseline, you can take photos, print them out and put them on your classroom wall and newsletter.

But there is so much more you can do.

With some help from the ISTE standards and some comments from coursemates in my EDEM masters course, I’ve linked the ISTE Standards for students to answer the question can technology be used to improve the quality of learning?

A camera catches a moment time. It can be a moment that is spontaneous, but it can also be one where the child uses it to express who they are and things they are important. Adding simple text using Path On, an app that adds text to photos, and poses turns a process of goal setting where the children might write down a sentence to one where the learner is actively constructing meaning through directing poses. By printing out those photos they become part of the learning environment for others to share and also as a visual reminder for a teacher and learner about their goal.

Because I use Flickr as an online photo sharing website, the children have access not only to their own photos but those of their classmates. Because this site is public and available to parents we’ve had numerous discussions about what photos get published to Flickr and which ones stay on the camera roll. When we’re out in public, we ask permission before snapping pictures (however the problem for my students is often that we get people coming up and taking pictures of them when we’re out in public!) Also discussions about intellectual property become a lot more real when the photo you want to use for your iBook was taken by a person sitting in the same as you and not some person half a world away. 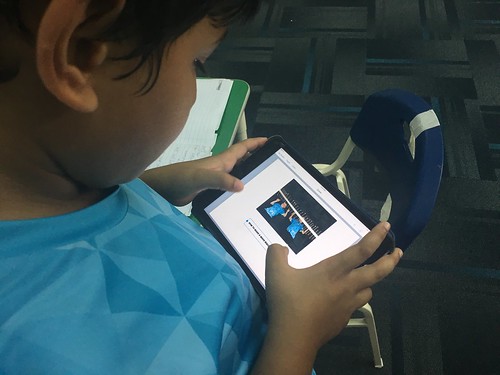 A big sell of the camera app is the ability for children to film using time-lapse and slow motion. When doing a science experiment, for instance, there are phenomena that are too fast, too slow, too small for the naked eye to detect. For example the other week the children were dipping tuning forks into the water and filming it. As they slowed the footage down they began to notice that the ‘splash’ they were observing as the fork went in the water were small waves.  In this regard, the camera can function as ‘virtual binoculars that Tina Grotzer says help deepen the children’s understanding through letting them see beyond time and space and uncover understandings about how the world works (Grotzer, 2015;2014;) especially when a child can overlay their voice over the images or film.

A child using a basic science experiment to explain tsunamis.

When do you take photos? What do you keep? What does the photo mean? Moran (2005) argues that photography is the language of inquiry for teachers. The interplay of taking the pictures, studying the pictures and using the pictures enables teachers to ‘gather, interpret and act on the knowledge they have created through taking photos of classroom learning.’ I would argue that this is a useful skill for learners to develop in their own learning. How are they documenting what they’ve learned? Do they take photos just at the end? Which photos do they bin and which do they keep? One of my coursemates for my EDEM630 pointed out that narrative assessment utilizes photography as evidence for assessment. She directed me to this wonderful resource by the Ministry of Education for documenting student learning of students with special needs with a strong New Zealand cultural aspect to student learning.  Another student alerted me to a therapeutic aspect to communicate about their emotional and social world,

Photography is a great way for children to learn how to break problems into parts through the art of documentation. For instance, the children can build a wave machine of jelly babies taking pictures along the way. The camera roll becomes a narrative of what happened. Through the use of an app such as popplet the children can also develop non-linear pathways of their thinking, by creating connections between ideas.

Within Apple’s photo app the children can add annotations to photos. This one is a simple projection of a cover of a book I’m reading in class. This photo enables me as a teacher to see a child’s first thinking about the book. In an increasingly visual world, the ability of learners to decode and view images is as imperative as creating them.

Photos are a great way for children to communicate big ideas where language barriers exist. A few years ago, a class of students took part in a collaborative children’s photography project where we toured around Singapore taking picture of our home and then viewed the photos of other children. These snapshots of life can be used to unpack a lot about life in a different country – the clothes the children wear, the buildings, the population density all have stories to unpack and also to create.

So there you have it.

It’s not just the taking of the photos that are important but the ability to utilize the photos in conjunction with other apps and classroom learning that leverages the quality of the interactions.

It’s a simple tool that when layered with other apps can be a powerful tool for learning.