We are officially finished week 4 of our PYP Expedition and I’m trying to blog our experiences of the process.

For those joining the journey be sure to see the previous posts.

Peak – not being in school but the learning continues

In late April I attended the Unleash Learning conference in Melbourne and was away for school two days. My plans for the substitute teacher were easy – kids know what they are doing. During the time I was away, I answered a few questions over email but came back to see most of the children were well on track.

This seems to be a theme. Ongoing events, rehearsals. Some signalled ahead of time, some only recently announced.

Busy has become a default in our schools. We jam in more and more activities into already overstretched calendars and planners with scant thought to what we need to stop doing.

What does this constant need to do more, take away from the experiences that our children already have school?

One of our goals for our expedition for this year was to have less of a ‘wow’ at the end and more of a focus on parents supporting children during the process. We’ve opened up our pod on Fridays for parents to get updates from their children on their progress which led to a warm family feel. Not only did the parents check in on their own children, but they also took time to hear from others.  Opening up the pod to parents also gave an authentic opportunity for the children who chose to develop their cooking skills to practice serving food to others.

Realized that the current ‘home base’ which we developed at the start of the exhibition was working for us. We were spending a lot of time dealing with behaviour issues and a few kids we were worried weren’t getting the teacher time they needed . So we stood back and thought – what is the behaviour telling us? That these children need more adult support.

We took time to identify the learners who we were concerned about and they were just a small minority. There was another group that we identified might need a little more support and the majority were on track and just needed the occasional check-in. As a result, our high support group had an enclosed allocated space with one teacher. The second group had a dedicated space within our open plan space with two teachers to help with goal setting and the third was free to check in with an adult as needed.

There were a number of our more introverted learners who decided to push themselves through public speaking. A number of them are using video as a tool to analyse their performance as people.  It’s been amazing to see their growth as people.

A pair of lovely learners are learning to sew as part of their PYP exhibition (final assessment for primary kids in a lot of international schools)- I’m modelling the skirt they created. 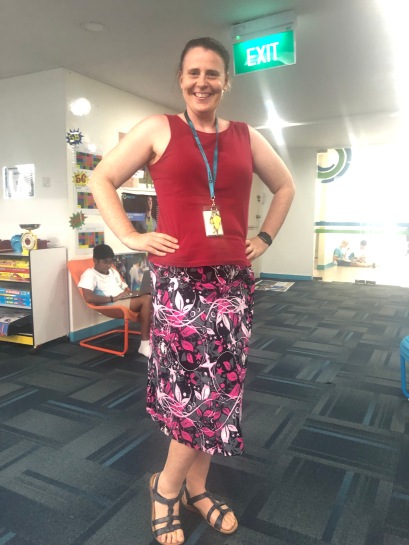 Peak and Valley- visiting a PYPx at another school

I’m always a little in two minds about visiting another school’s exhibition. On one hand, it gives the kids a sense of purpose of their own exhibition. On the other, it can be so easy for the kids to see a model and then follow that. We took some time to unpack our visits with the children. The children valued taking time to interact with their peers but found long speeches, large screeds of text offputting. The children were also aware that unlike other schools, they had not been put into formal groups based on a teacher perceived area of commonality. Our teaching team explained that it has been challenging to manage nearly 70 individual learner inquiries but we felt that collaboration based on shared interest was important. However, that meant the success of their own exhibition hinged on them.

So two weeks on – definitely more peaks than valleys. But isn’t that what PYPx is about?