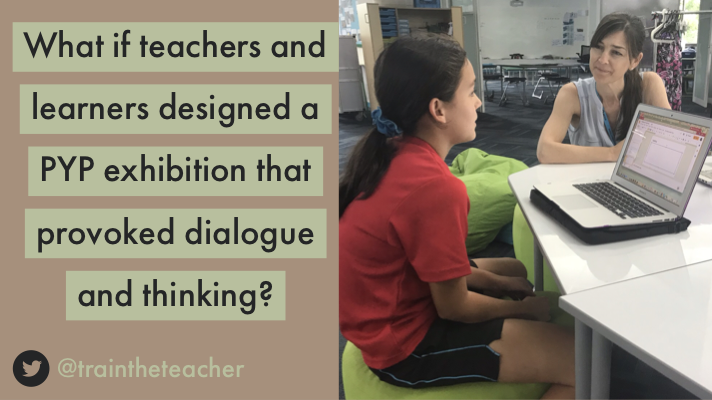 Wow was that week 5 of PYPx gone? For those just joining, you may wish to look at previous blog posts.

We started our staging process this week by reflecting on previous exhibitions that we had visited. The children thought about the ideas we would like to steal, ideas to adapt and ones we ‘honour in the museum’ (this practice is not relevant to our context).

What came through strongly from the learners, is that they valued the ability to interact with knowledgeable learners with unique and large-scale installations. What the children didn’t like was being talked at with large amounts of text to take in.

These views were similar to those we had as teachers – that large poster boards with kids repeating the information already on display were not great ways to engage the audience.

We wanted our learners to be able to:

Asking kids to go beyond the familiar path as well as consider the needs of the audience is a challenging ask for 11-year-olds!

Fortunately, a colleague and I had just been to a design thinking workshop by Dr John Nash (@jnash) and Dr Beth Rous (@bethrous) that we were able to adapt for our learners.

Setting the scene – to think symbolically

We started our time for the next few days by using Tarryn’s symbolic questions of our learners as warm ups.

The answers the children gave were fascinating revealing hidden insights into both the process of our expedition* as well as the learners themselves.

We used this as a springboard to discuss what the needs of different members of our community might have during the staging of the expedition:

In particular that both the process and product of symbolic piece is likely to reveal the hidden, blind, and unknown self to the audience.

One important goal in our PYPx staging was for the learners to start to empathise with the needs of the audience.

In order to help our learners develop their thinking around the needs of others, we first asked learners to go through the design process for the staging of someone else’s expedition!

We developed some success criteria and tasked our learners with holding an 8-minute conversation with a randomly assigned peer about their expedition. 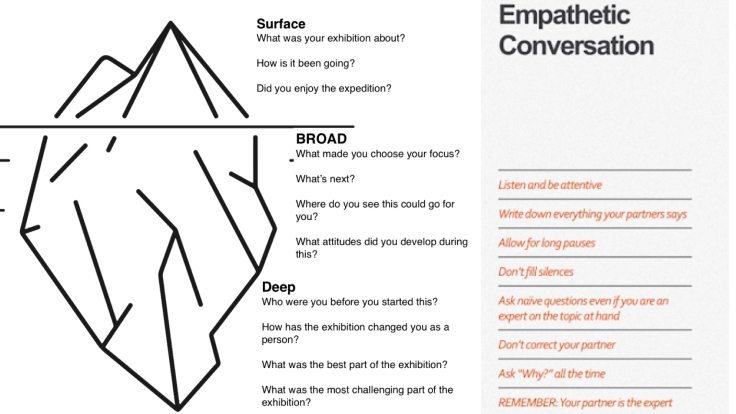 The children were encouraged to take notes about their observations of their partner’s answers before switching places.

After the interviews were finished children took some time to consider

The children then listed three needs the person might have about the staging of their expedition and one insight (what really seems to matter most).

The children then selected one need to solve based on the thing they think matters most to the other person.

The next stage was for the children to create 3-5 ideas about how they might solve their partner’s key problem. They then asked their partner for some feedback on their solutions. 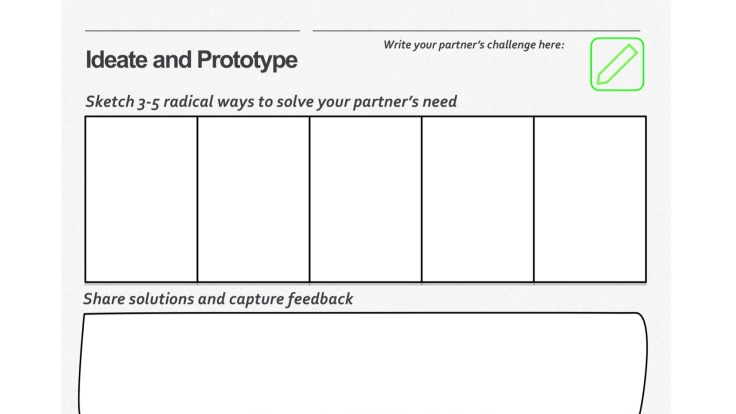 The children then developed a final sketch based on the feedback from their peers.

The children then had 10 minutes to build a 3d Model of their final idea using a bag of preassigned building materials.

The children then gave their finished product back to their partners. That process of making and building was important part of our journey.

It put children into the role of both a creator and an audience member. Through this process children began to understand

The next day, we used Tarryn’s awesome work to explore the different modes of communication that the children could represent their learning from PYPx – including multilayer graphing, colour symbol image, playlists, drama.

We asked the children to think, pair, share before synthesising our own success criteria.

The children then developed their own ideas and planned out their building and construction timeline.

We have experimental art

Sometimes the learner’s products that they have been developed during expedition become the symbolic piece!

There were two challenges the learners faced.

For the first problem teachers individually conferenced with the child going back through the PYPx symbolic thinking slideshow – talking with learners to find the metaphor that they identified with the most and helping them to develop a concept. 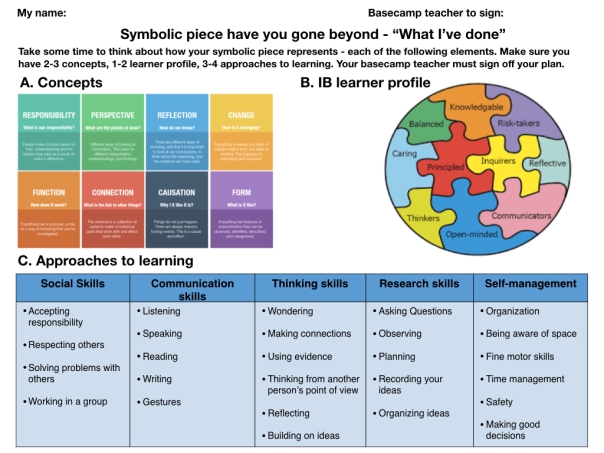 This is ‘backwards’  from the normal process where the first week of the exhibition process is normally spent identifying key concepts and developing lines of inquiry.  Yet by leaving this process until last, the connections are deeper and more meaningful for the learner.

One group of children has been working on developing a mascot for our school since October as an i-Time project they moved into the expedition. They’ve interviewed key members of staff, made presentations to staff and students, surveyed parents and presented their initial findings to the school’s leadership team.

Their ‘symbolic piece’ will simply be the finished mascot. As the other children began building and creating, the mascot team were worried that they wouldn’t have much to show particularly if the school designer had not finished the final design or it had not been approved by the school’s senior leadership team. When I asked the children what they could show, the identified they could show the entries from their ‘design a mascot from the selected theme’ competition.

Yet the children worried it wasn’t ‘enough.’

I asked them what concepts they had used in developing the mascot the children were quickly able to rattle off all the concepts they’ve used as part of developing this project with evidence of their actions. They could do the same for the learner profile and approaches to learning! I then asked them where they would prefer to spend their time, creating a symbolic piece or getting this project finished. They chose to spend their time to get a final mascot design finished.

Their story demonstrates that when the learning is deep and powerful, connections between the curriculum and the inquiry are obvious to both the learner and the teacher.

Posterboards were always a scaffold for children to talk to people about what they did during exhibition.

What if teachers and learners designed an exhibition to provoke dialogue and thinking?

What if teachers and learners designed an exhibition that showcased how the PYP has changed them as a person?

How might teachers and learners design an exhibition experience where the ‘hidden’ and ‘unknown’ self is revealed through conversation?

*see part one for our naming convention. 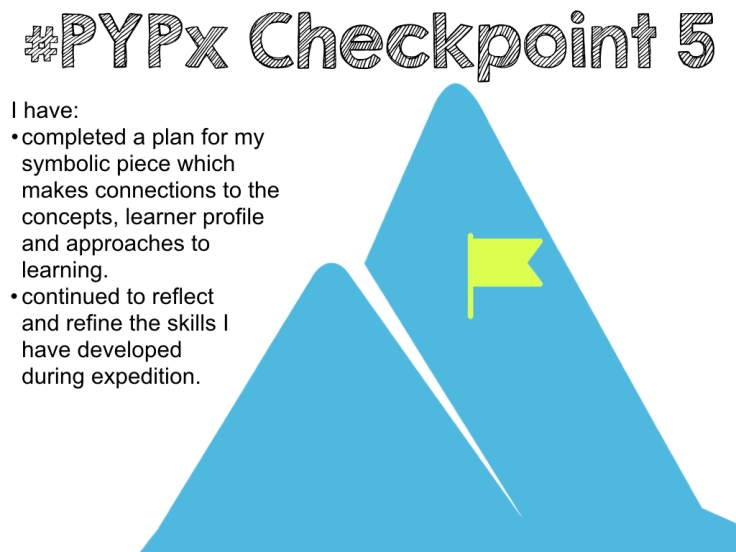 2 thoughts on “Bringing design thinking to the staging of #PYPx”